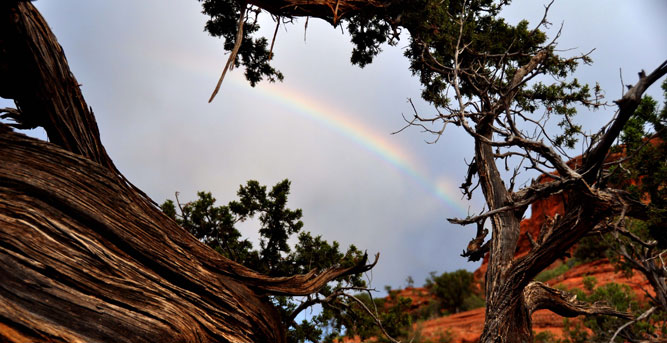 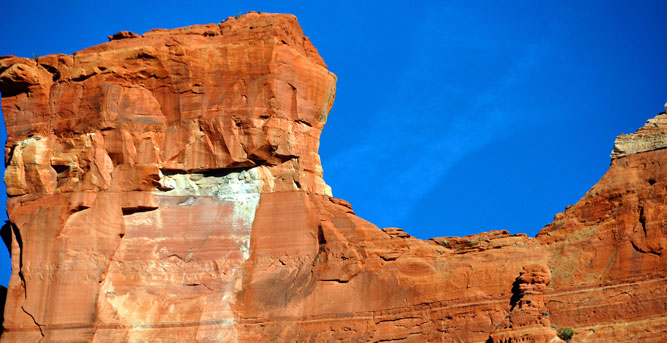 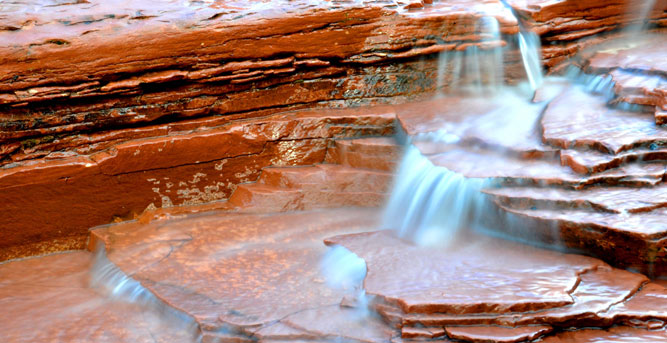 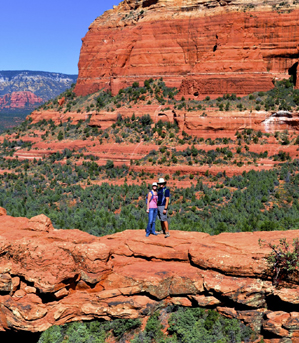 Summary: This is it…the most iconic trail in the Sedona Red Rock Country. This trail captures unimaginable beauty, towering cliffs, perennial water that you cross 13 times and Old West history. Ruins of Mayhew Cabin mark the initial part of the trail, which was built by “Bear” Howard in the 1870’s. “Bear” earned his name by supposedly killing 4 bears with only a knife. In 1880, the Thomas family moved into the area and made Bear’s cabin into a lodge called Mayhew Lodge. Decades later (1924) the famous great American western novelist, Zane Grey, stayed at Mayhew Lodge and wrote the book Call of the Canyon which was later made into a movie. The lodge operated until 1968 and hosted many of Hollywood’s elite including James Stewart, Clark Gable and Walt Disney. The Forest Service took over the Lodge in 1968 and later (1976) burned to the ground. West Fork Trail will always hold a special place in my heart.

Cathedral/Templeton Trail is a romantic adventure. The majesty of Cathedral coupled with the beauty of Oak Creek and the cool canopied forest leading down to the creek make this a great hike for couples in love and families looking for a moderate adventure where the kids can jump around in the water. The is my wife’s favorite hike in the area and I completely understand why.

Summary: Devil’s Bridge stands as one of the great geologic formations in the Sedona Red Rock County. This hike rates in one of the top 5 “must do” trails in Sedona. To make the most of this adventure we like to hike the 1.2 miles via Chuck Wagon Trail to the Devil’s Bridge Trailhead. In the past, many would attempt the drive up FR 152 (Vultee Arch Road). This road is notoriously punishing on cars and is not recommended. Instead, enjoy the winding 1.2 mile hike on Chuck Wagon through an open low growth forest and consider it a “palette cleanser” for the main entrée…the spectacular Devil’s Bridge.

Summary:Soldiers Pass Trail is a moderate trail that offers a back country feel yet is almost located in the middle of town. Sandwiched between Brins Ridge and Capitol Butte (a.k.a. Thunder Mountain), this trail offers everything you would expect from a great trail. The trail rolls through a number of arroyos, past the area’s largest sinkhole (Devils Kitchen), along the “Seven Sacred Pools,” then up 509 feet atop Brins Mesa. The highlight of the trail (according to my children) is the impressive sinkhole which was reported as a major collapse event in the 1880’s (retold by Albert E. Thompson in 1968) and then a secondary event in 1989 increased the size of the sinkhole by 1/3 (large block on the northern wall).

Summary:Boynton Canyon Trail is a stunning hike through a picturesque canyon that moves you through a varied landscape. Make no mistake the real gem of this trail is found in the final 1/3 of the hike as you enter a high forest with large pines, oaks and even alligator junipers. The first 2/3 of the trail are really just a “means to the end” as you make your way through low growth scrub forest and along the east side of Enchantment Resort. As you hike this trail you will notice a stark contrast in temperatures as you leave the low growth, open red rocks in the first 2/3 and enter “the forest” and rise in elevation. The trail ends in grand fashion as it rises up and crescendos onto a quasi-plateau above tree tops.

Summary: Courthouse Butte Loop Trail is a great moderate hike for the whole family. Do not let the “carnival” at Bell Rock discourage you from doing this trail. While many come to “play” on Bell Rock, they are truly missing the best part of the area. The real gem of this area is in doing the entire loop. You will have a choice on the southern side of Courthouse of doing the Courthouse Loop or taking the Big Park Loop (preferred). As you loop around the eastern and northern side of this great butte, you will unlock the most scenic, tranquil and upclose views of the trail. As you come around the northern side of Courthouse, do not miss the cluster of Ocotillo just below the smaller butte that my daughter affectionately calls “Pancake Rock.”

Summary: Fay Canyon is a great trail for the whole family. Unlike many trails that require you to go “down, across and up” numerous arroyos (dry creeks), Fay Canyon is actually relatively flat. It is one of those trails that starts out good and keeps getter better that further you make your way back into this box canyon. The high red rock cliff walls coupled with the large oak and juniper trees make this a great trail year-round. 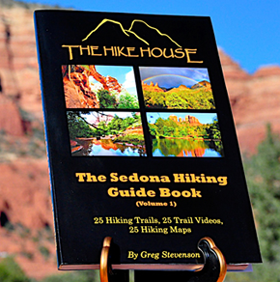 Greg Stevenson has created the best and most comprehensive guide for hiking in Sedona, Arizona. Beautiful imagery, lots of trail detail and tips on how to get the most out of your hike abound in this guide. For more information on this trail guide book, click here. To purchase the book, click the buy now image below:

The Hike House is your one stop resource for hiking in Sedona, Arizona. Find hiking apparel and hiking shoes, hiking trail maps, personalized hiking trail information, and much more at the integrated Sedona Hiking Store located at www.thehikehouse.com 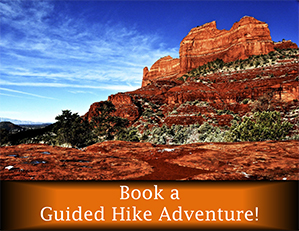 Did you know that Sedona is home to more hiking trails with better accessibility than any other destination in the U.S..? With close to 200 trails, Sedona has become the “mecca” of dayhiking. From The Hike House, there are 43 hiking trails within a 5 mile radius and over 80 trails in a 10 mile radius. Not to take away from some of our other great hiking destinations, but many are characterize by … END_OF_DOCUMENT_TOKEN_TO_BE_REPLACED